The kids are settling into their school routine. I have had a few opportunities to take them to school and it is very cool to see Emma and Christopher, who are in the same class, say goodbye to us in the morning and meet up with their classmates. They are getting used to the routine and structure. They are learning a lot on school. Michaela can spell her name and sounds out each letter of the alphabet when tracing the letters. They have also quickly made a few networks of friends and routinely rattle off new names of friends each day. They are starting to go on after school play dates. 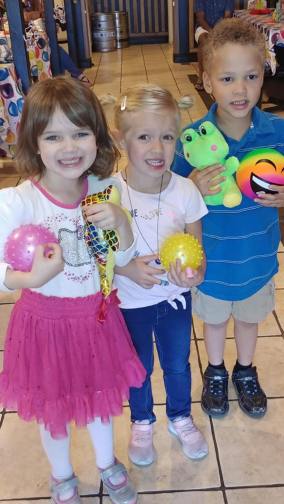 The requests for play dates after school is totally new for us. As is the mass blasts to the entire class or birthday party invites. Given that that Michaela is in a separate class, we have decided to not let them go to parties that only one child was invited to – that will have to happen eventually but not now. We can defer navigating the feelings of disappointment that are sure to follow until Kindergarten.

Emma has been making a lot of progress with words and can draw her name. She loves to learn.

The kids love their new neighborhood. They love going out and exploring and saying hi to new people. Catches everyone off guard!