I have always enjoyed studying people, so I figured I would turn the lens at our kids and share my assessment of their current personalities:

Michaela is a real firecracker 🧨. Very, very talkative, inquisitive and has a big imagination. She usually wakes up talking and it is a play by play of whatever is cooking in her head, whether it makes sense or not. She believes that she is the center of the universe, and is very dominant around her siblings. She is very social around other kids, often introducing herself and just jumping right in to the mix, especially with older kids. She is very strong willed and tends to be comfortable trying to repeat her demands to see if she can get her way. She loves one on one time and showing off her parents. She tends to obsess over things like specific toys or something she wants to do – she is relentless to boot.

Emma is very sensitive and usually spends a majority of the day cycling through a variety of emotions and whining about whatever is most convenient 😂. She tries to maximize her space between her siblings. She does not like it when they touch her. She still chooses carefully when she mixes it up with them, and it is usually at the worst times like when it is time to wind down for the evening. Emma loves to engage in very well thought out conversations and is very serious when she is talking, approaching every response with purpose and nodding her head with confidence. People that talk with her are always amazed with how clearly she speaks. Emma is our resident drama queen. She is very particular about how she likes things, especially food and drink. For example, she only likes her waffles with butter and no syrup and they can’t be toasted too much 😂. Gonna be hilarious when we let her order from restaurants 😂. She also only likes plain water with no lemon in it. Crumbs on the couch hurt Emma, as well as the breeze in the outdoors 😂. She also doesn’t like loud noises – actually none of them do, and this is probably a product of their time in the NICU. She loves to tell us how she feels, especially when she’s tired. She is often the first to pass out each night. She has a very sensitive sense of smell, and is always questioning various smells. Emma is very honest but also is a terrible liar, often blaming others for mischief she clearly brewed up. Let’s just say she is comfortable in her own skin 😊🤦🏾‍♂️

Christopher’s first pediatric assessment indicated that he was a very shy and timid boy who was very attached to his mother. Four years and 9 months later and this is still very much the case. Christopher is very shy and usually doesn’t introduce himself and often blushes when asked to. On the 4th of July I took him to buy fireworks 🎇 and afterwards we went to Target to buy him a toy and he blushed when I took the photo of him. He purses up his lips and smiles when he is acting shy.

Christopher loves building things and lining things up in an orderly fashion.

He is also really good at solving puzzles on his tablet, especially timed challenges. He loves one on one time with me and generally doesn’t say much when we are out and about. I think he is left handed like me but he does some things with his right hand like me. He’s not showing any signs at this time that he is very athletic. He is still very clumsy and his motor skills are catching up to the girls. As they say, though, girls tend to advance faster than boys.

Together, they are quite a handful. Three different versions of demands starting from when they wake up until when they start passing out in the evening. The ever present ability to work in threes to get their way. Instant playmates with an unbreakable bond. Very social kids that make new friends easily. Michaela and Christopher are pretty close and tend to get in trouble the most. You can see their closeness in the pictures too. But Michaela is clearly the heart and soul of the combo: 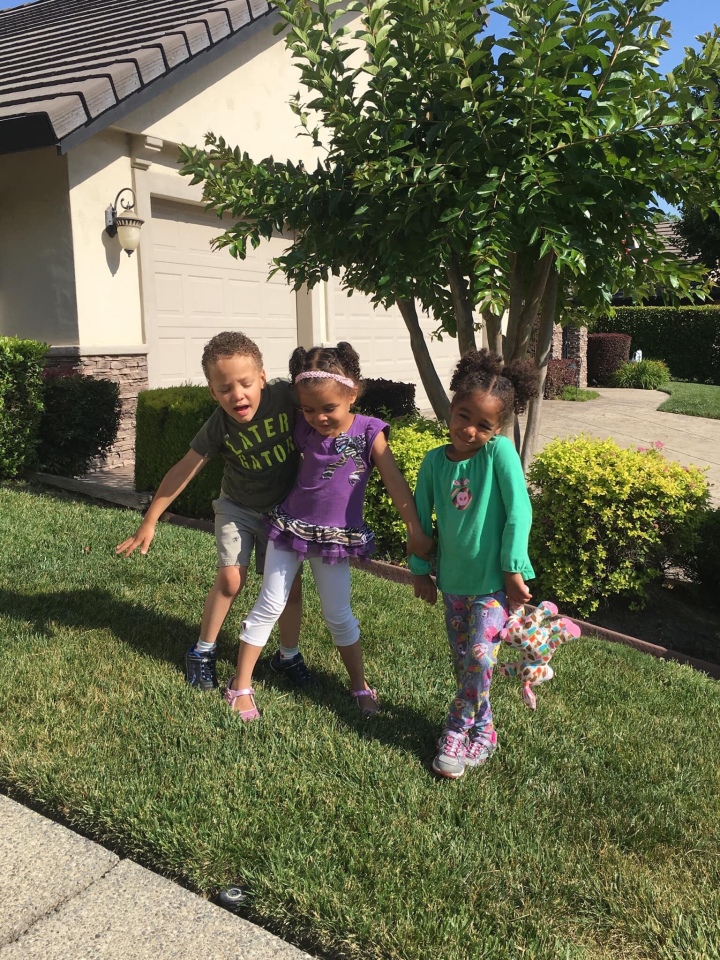